MAJOR SPOILERS below. You’ve been warned…

So, my recent completion of Telltale Games’ THE WALKING DEAD episodic, retro cool, point and click adventure spurred some interesting thoughts. This is a good thing, most games don’t spur much thought at all.

One of the really neat things about the game is that at the end of each episode, it gives you a rundown of how your choices compare to other players. Typically, this falls in the 50% range. “54% players chose to bring Lily with you in the RV.” I think the reason it’s so evenly split, is probably because most players are playing twice, and trying different choices each time. However, one choice, a really relevant one, stuck out to me. I was surprised that only 10% of players chose to not encourage Clementine to shoot you at the end, in order to stop you from turning.

I chose the opposite, and had Clementine leave me to turn on my own.

On the surface, having her shoot you may seem like the logical, moral choice, but for me, I felt that was an action I just couldn’t let her live with. It would be a memory she would always carry with her: having to shoot and kill someone she loved. And yes, she might be sparing me, but to a child that’s still a heavy burden to live with.

I felt that taking that burden onto myself, not giving my character an easy avoidance of turning by having Clem shoot me, was the more noble choice. I’m making a sacrifice for her. Instead of having her make a sacrifice for me.

It goes without saying that the game’s ability to illicit such complicated musings is a credit to the design and the story. I thoroughly enjoyed the series, it was like playing a modernized version of a Lucasarts or Sierra point and click adventure (I’m still waiting for FULL THROTTLE 2), and I really appreciated the emphasis on dialog and interaction over action and shooting things (not that I have a problem with shooting things).

However, the ending itself did make me think about the best ways to sell a “downbeat ending” from a narrative standpoint, which, this game ultimately has. Your character dies at the end no matter what you do, and you don’t get to continue on with Clementine, a character who you’ve come to really care about. 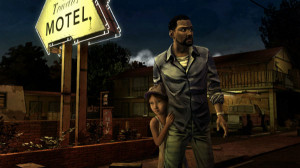 As much as I enjoyed the game as a whole, I felt like there were some missed opportunities from a character development standpoint that would have felt more rewarding at its conclusion. I think the main hurdle you face in doing a downbeat ending in any medium, is making that ending still feel satisfying. Stories which have downbeat endings and are not interested in being satisfying, I think, do a disservice to the reader/consumer. You can have a sad ending, without it being depressing and unsatisfying. Frank Darabont (the first show runner for THE WALKING DEAD on TV) is a master at that, and playing through this game helped me understand some of the mechanics to pulling it off.

I think the key is the character journey. And the lack of a true character journey for Lee (the player character) is the game’s biggest failing. You start out as a man on his way to prison for murdering his wife and her lover. A plot point that really doesn’t develop beyond that simple concept, with the exception that a few of the secondary characters recognize who you are from the papers, etc. There is also a moment where you can choose to admit your crime to other members of your group, but doing so seems to have no real effect on the narrative progression.

The ironic thing, is that all the pieces for what was needed to establish a true character journey for Lee and THE WALKING DEAD are already in place. I think it would have been far more satisfying if Lee had begun the story as a man who had committed a vile act…and was NOT repentant. Make him a bad guy. A dangerous sort. And through his interaction with Clementine, comes to see the world differently. He comes to care about someone for the first time in his life. He comes to feel responsible for them. And, at the end, he is willing to sacrifice himself to save them. Something that would have been impossible for him previously, before the story began.

When you add in this journey, suddenly the ending, as downbeat as it is on the surface, becomes satisfying. Because something good has come out of the negative. Lee has learned to care, he has found what it is to put other people before himself. He has grown. He has become something better. And that, in itself, is satisfying. It feels good when you get there…even though he dies at the end.

As it is now, Lee is the same person he was at the beginning of the story. He doesn’t grow. So the ending has nothing particularly redeeming about it. It’s just depressing and down beat. Which, is certainly modern and sophisticated (to a degree), but nothing I would want to experience again.

All in all, though, the five part WALKING DEAD game series was an excellently crafted experience, both from narrative and game play standpoints. I hope other developers follow Telltale’s lead and return to more intensely narrative driven storylines, such as this one.