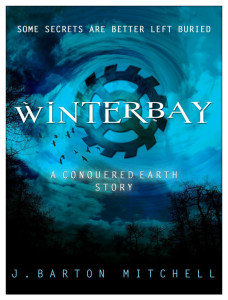 Mira Toombs has fled Midnight City, leaving behind her home and the people she loves in a desperate gamble to repair the damage her Tone enhancing artifact has caused. It is a journey that will lead her to Winterbay, an infamous, frozen city built in the middle of Lake Michigan. A place of secrets and conspiracies – and the one place more dangerous for Mira than Midnight City. Winterbay is the last bastion of the World Before, a place that has shunned the power of the Strange Lands, and where being a Freebooter means the death sentence.

To get what she needs, Mira must take a desperate bargain. One that will lead her into the city’s icy depths, where its greatest and most dangerous secret lies guarded by a massive, deadly machine that rumor and myth say only one person can disarm. The one person not allowed inside the city walls.

Winterbay is a 14,000 word short story, part of J. Barton Mitchell’s CONQUERED EARTH series, set directly before the events of Midnight City and The Severed Tower, showing how Mira Toombs came to be set on a path not only to Clinton Station, but to the two people who would change her life forever. Holt and Zoey.