You must be feeling really, really impressed with yourself by this point. Tracking down the little clues, clicking on this, clicking on that. Well, Darwin, here’s where things get REAL. I give you…THE LEVASSEUR CRYPTOGRAM: 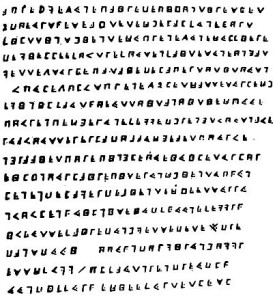 The work of Olivier Lavasseur, a pirate, nicknamed La Buse (The Buzzard) or La Bouche (The Mouth) in his early days, called thus because of the speed and ruthlessness with which he always attacked his enemies. He is also known for allegedly hiding one of the biggest treasures in (HEY!) pirate history, estimated at over £1 billion, and leaving a cryptogram behind with its whereabouts.

In 1724, Levasseur sent a negotiator to the governor on the island of Bourbon (today Réunion), to discuss an amnesty that had been offered to all pirates in the Indian Ocean who would give up their practice. (Hey, human!) However, the French government wanted a large part of the stolen loot back, so Levasseur decided to avoid the amnesty and settled down in secret on the Seychelles archipelago. Eventually he was captured near Fort Dauphin, Madagascar. He was then taken to Saint-Denis, Réunion and hanged for piracy at 5 p.m. on 7 July 1730.

BUT…before he did, legend tells that when he stood on the scaffold he had a necklace around his neck (Ugh, so dramatic…), containing a cryptogram of 17 lines, and he threw this in the crowd while exclaiming: “Find my treasure, the one who may understand it!” What became of this necklace is unknown to this day. Many treasure hunters have since tried to decode the cryptogram hoping its solution will lead to this treasure.

I, of course, have already broken this cipher, using the following alphabet code I came up with myself (Pssst….he’s lying to you, scroll down): 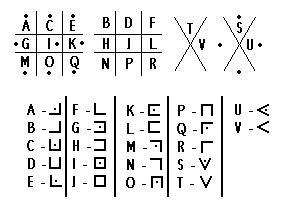 Using this alphabet, I expect you (Oh, please…) to decipher the cryptogram, and find the treasure yourself, where I have hidden your next clue. I expect it will take many months of effort on your part, and no small expense at traveling (you’ll have to get to the Seychelles archipelago by either submarine or sea plane), but I promise it will be worth it. I’m sure you can fit this challenge into your schedule and budget.

(I’m hacking this page, for both your benefit and mine. Will you please just scroll down to the very bottom?)

(Little more, hurry before he notices)

(Finally. Both of you are so dense. Click here to initiate my webchat. Quick, there’s little time to waste.)

“Mitchell’s prose debut, the first in a dystopian sci-fantasy series, is an imaginative mix of danger and humor… The action will keep readers turning the pages.” — Kirkus Reviews

Popular From the Blog