MIDNIGHT CITY, book one of my science fiction series CONQUERED EARTH, is set on a near future Earth conquered by a powerful, technological alien race called the Assembly. For most of my life I’ve had a love affair with stories dealing with aliens and alien invasion, so I thought I would list of some of the more obscure ones you may or may not have seen or read before. Anyone can list ALIEN or THE DAY THE EARTH STOOD STILL or CLOSE ENCOUNTERS, but I always like hearing about things I wasn’t previously aware of so I can try them out. To that end, here are my Top Ten obscure (depending on your viewpoint) alien stories. And please list your own favorites in the comments, if you have any you think I might dig.

One of the first Anime TV show imports from Japan back in the early 80’s, Robotech, I have no doubt, inspired a whole host of creators from my generation. It was actually three separate Japanese TV shows, re-dubbed (and in many cases rewritten) to be one large story line, encompassing the invasion of Earth by mechanized aliens, its liberation…and subsequent reinvasion. Probably dated now, and the dialogue and characterizations were somewhat juvenile, but in spite of that, the overarching storyline for all three “generations” is pretty epic and well conceived. Taken as a whole it’s well worth a watch, especially if you remember it as a kid, like myself. The alien “mecha” in Robotech, especially the first and third generations, were a big influence on the Assembly’s walkers in CONQUERED EARTH. 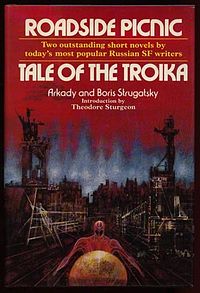 Fairly well known Russian cult sci-fi novel by Arkady and Boris Strugatsky, published in English back in 1977. Set in Russia, with the fascinating concept that aliens visited the planet in a variety of locations. They landed, spent two days time, and then vanished, but the debris and refuse they left behind created areas of strange properties and effects called “Visitation Zones”, most of which are very dangerous. These zones are highly regulated areas, where only certain people are allowed in, called Stalkers. Roadside Picnic was the basis for Russian film maker Andrei Tarkovsky’s movie STALKER, and it has influenced numerous creators since, including myself. The Strange Lands, it will come as no surprise, while quite different, is still inspired by the Strugatskys’ “Visitation Zones”. The book goes in phases of being somewhat hard to find, but it’s well worth the effort.

At the Mountains of Madness

H.P. Lovecraft, one of my favorite authors, is generally considered a horror writer, and that distinction is well earned. Most of his works are incredibly atmospheric monster stories, but if you look closely, you’ll see that many of them are, in reality…alien stories. When you delve into his “Mythos” (a grouping of tales all interconnected by a similar, creepy, epic mythology), you see that his “old gods” and ancient evil races are really just aliens from outer space, which is pretty damn cool. AT THE MOUNTAINS OF MADNESS is my favorite Lovecraft piece, and is presented as a letter from a former member of an Antarctica expedition who recounts his terrifying experiences on the continent when his group finds the remains of a lost alien civilization frozen in the ice. Atmospheric and genuinely frightening, with an amazing level of realism (due to the author’s tense, first person writing style), the entire thing fills energized with an aura of grim foreboding…which turns out to be very appropriate. I’m still sad about the loss of Guillermo Del Toro’s film version, though I have heard rumblings it might be back on.

While H.G. Wells’ WAR OF THE WORLDS is anything but an obscure choice, Orson Welles’ 1938 radio play version might be. Not because of its lack of notoriety (most people are aware of it), but because, sadly, not many actually seek it out for a listen. A fascinating example of both Welles’ ingenuity and vision, and of an early (maybe the first?) attempt at electronic, post-modern story telling. It might feel a little dated, but once you adjust to the language and style, it really is a gripping retelling of the science fiction classic, and it’s easy to see why so many people were fooled by its inherent realism.

Continuing with the revisionist angle of WAR OF THE WORLDS, comic book legend Alan Moore’s second League of Extraordinary Gentlemen storyline follows its group of heroes repelling H.G. Wells’ alien invaders. The comic series, with art by Kevin O’Neill, manages to feel truly apocalyptic as the narrative unfolds, and Moore and O’Neill’s interpretations of Wells’ aliens is inspired and terrifying, as is the exciting plot featuring a host of Victorian era literary “heroes”, such as Alan Quartermain, Mina Harker, Dr. Jekyll, Captain Nemo, John Carter, and Dr. Moreau among others. This series, like most of Moore’s work, contains adult themes, and is probably not for younger readers. 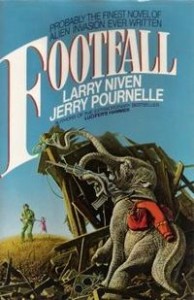 Larry Niven is probably most well known for the milieu-style storytelling of his KNOWN UNIVERSE series, but in FOOTFALL, he and co-author Jerry Pournelle set their sights on something a little more plot oriented: an alien invasion of Earth. With a unique narrative, a large host of interesting characters, and a very well conceived, very original alien race called the Fithp, FOOTFALL is a fun and engrossing read. On top of it all, the aliens themselves look like giant, four trunk elephants with spaceships. How do you beat that?

Another in the “fun read you may not have known about” category, John Steakley’s ARMOR is an exciting novel clearly inspired by Heinlein’s STARSHIP TROOPERS, following a soldier drafted into a war fought with mechanized, powered armor against an overwhelming and mindless alien threat. An interesting analysis of the psychological ramifications of war and violence, combined with gripping action scenes, ARMOR is more adrenalized than TROOPERS, yet still has a lot to say. Steakley is probably more well known for his novel VAMPIRE$, which was made into a movie by John Carpenter in the 90’s. Sadly, Steakley, who grew up in my home town of Cleburne, Texas believe it or not, died while working on the sequel to ARMOR.

An interesting, low budget, yet slick science fiction movie that might have slipped under the radar of many film goers, MONSTERS is set in the U.S./Mexico border region, where strange lifeforms sprang to life after the crash of a NASA space probe carrying alien bacteria. These lifeforms are big, mean, and now inhabit the landscape, making travel through the zone almost impossible. The story follows a man hired to escort a woman through the infested wilds in order to reach the United States. While the aliens themselves are well conceived (and deceptively complicated), the film is really a well done character study of the two leads’ growing relationship as they try and safely pass through a dangerous wasteland. An original and tense alien movie all fans of the genre should check out.

The Adventures of Buckaroo Banzai Across the 8th Dimension

It’s hard deciding whether or not to label this incredibly quirky movie “obscure”. While BUCKAROO BANZAI was not a box office success in 1984, it did eventually grow to have a gigantic cult following in the years after its release. The story follows the efforts of the multi-talented Dr. Buckaroo Banzai (neurosurgeon, physicist, test pilot…and rock musician) and the Hong Kong Cavaliers (his team of eccentric geniuses) to save the world from inter-dimensional aliens called Red Lectroids from Planet 10. Over the top, non-sensical at times, yet thoroughly engrossing with a huge, well layered mythology, BUCKAROO BANZAI is as unique and fun a popcorn movie experience as you can have, and one of my favorite films ever. I’ve seen this movie countless times and I’m sure I’ll see it countless more, it really couldn’t be more special to me. If only we had gotten BUCKAROO BANZAI AGAINST THE WORLD CRIME LEAGUE. If you dig the movie, try reading the novelization by Mac Rauch. The same outlandish story, but Rauch (to his credit) takes the subject matter completely seriously, and elevates it into something special.

Also probably not necessarily “obscure”, but I am continually surprised by how many people I meet who have never seen this movie, which, arguably, is filmmaker James Cameron’s greatest achievement, not just technically (and it is incredibly technically impressive), but also from a writing standpoint. Cameron’s best  script deals with the sinking of a U.S. Naval submarine after it collides with an unidentified object, and the group of underwater oil workers tasked with recovering it. As they set out to do so, under duress, they gradually start to figure out that what the submarine collided with was not of this Earth. Gripping in every way, with complex characters, exciting action sequences, a cool alien race, and the benefits of what turned out to be the most ambitious (and grueling) underwater film making experience in history, the Abyss is a must see, if for some reason you never have.