Why Books are Interactive

Over a Pilsner recently, I told a friend that I thought books were almost as much an “interactive” medium as games. I play a lot of games, specifically RPGs, so I’m not saying it lightly. In fact, I think that books might be even more so.

Here’s my logic, such as it is…

I think the reason books are so engrossing, is because they’re stories that require reader participation to tell.

It’s just words on a page, there’s no visuals. The reader has to create those themselves. Sure, authors give us the basics.

He walked with an accustomed limp that looked it had settled in over the years. Dirty jeans. Frayed, David Bowie Space Oddity tee shirt. He had a habit of checking behind him as he walked, and whenever he did, he gave his John Deere hat a nervous quarter twist over his razored head.

The Polestar was a Corvette class gunboat fresh out of spacedock. Triangular fuselage, like all the series seven ships, cockpit near the rear and under the big twin radar assemblies, the plexi-steel windows glowing a mere hundred feet from the vessel’s three main guns.

But how much info is any of that really? Which David Bowie tee? What leg is the limp on? Triangular shape, but are we talking isosceles? And what color is the engine glow?

I think one of the many reasons you and I love books so much, is because we, as the readers, get to participate in the story telling process. 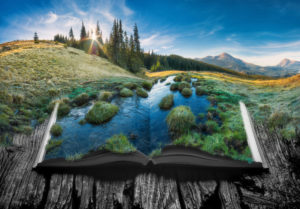 Consider a parallel example: stories that are over written.

Jordan clearly spent a lot of time meticulously crafting his story world, down to the finest details. That kind of commitment and imagination, obviously, deserves to be part of the narrative. I’d guess there are many readers who read his series specifically because of that detail. But, if you’re not Robert Jordan, the effect that going to that level of descriptive detail can have is that it may generate a bit of boredom or disinterest. Not because it isn’t compelling…but because everything is being given to you. There isn’t as much work on your part, you aren’t invited to participate in the same way. Your mind is just transcribing details as they’re recited.

Movies and television are even worse. You don’t have to picture anything, detail laden or not. It’s right there in front of you. You know what Indiana Jones looks like, you can see his hat and his bull whip and his charming smirk. You don’t have to help out at all.

Of course, I love movies and television. I’m just saying, ironically, they aren’t as interactive as books. You just don’t get to participate in the storytelling in the same way.

When I read a novel, I tend to picture myself in the book as the main character. No matter how different from us he or she is described, they start to take on my image. My facial expressions. My voice. Maybe it’s the same for you.

My favorite book series as a kid was Dragonlance, by TSR. The Chronicles and Legends trilogies by Margaret Weiss and Tracy Hickman had a major effect on me back then, and really made me want to be a writer myself. I attribute this mainly to the fantastical and well crafted world and characters the authors created, but also to their measured prose descriptions. They got out of the way of my imagination, and I loved the series because of it.

I think one version of good writing, is writing that is comfortable letting the audience participate. Writing that backs off the descriptions, not only trusting the audience to figure out what it is you’re describing, but knowing they actually may prefer to come up with their own versions of it themselves. It’s also my favorite version of good writing.