James Horner and the Giant Spring 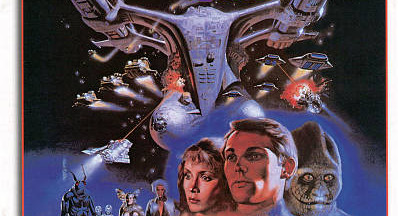 I’m listening to my (sadly) out of print Vinyl edition of James Horner’s awesome score to BATTLE BEYOND THE STARS, not only my favorite Roger Corman movie (a tough call to make, it’s like picking your favorite Robert E. Howard short, but come on: it’s a remake of THE MAGNIFICIENT SEVEN in space, itself a remake of SEVEN SAMURAI in the old West) but still one of my favorite soundtracks ever. Horner’s loss is a very tough thing for me, because not only was he my favorite film composer, his early and mid-career defined a giant part of my life. In fact, he was as much a creative influence for me as were Sergio Leone, Frank Miller, William Gibson, Robert Jordan, Chris Claremont, and H.P. Lovecraft. Maybe that seems odd, given he was a composer, not a writer, but I spent countless hours imagining new scenes set to his music, and doing so unlocked my imagination in a way nothing else did, even reading. I’m not completely sure I would have become a writer without James Horner’s music, and that’s saying a lot. 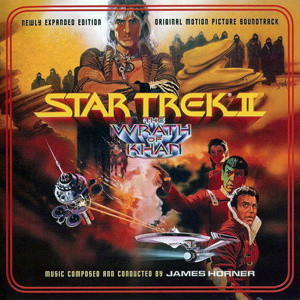 BATTLE BEYOND THE STARS, HUMANOIDS FROM THE DEEP, ALIENS, THE ROCKETEER, WILLOW, KRULL, BRAVEHEART, GLORY, STAR TREK 2 and 3 (Goldsmith is probably more associated with film Trek than Horner, and rightly so, he created the movie theme that got used over and over, but Horner’s scores to 2 and 3 have always been my favorites, and set all the inherent emotion in those scripts free. Watch the scene where Kirk outsmarts Khan by lowering the Reliant’s shields and listen to how Horner perfectly builds the tension already there) too many to list, but the one thing his early work all had in common was this unabashed enthusiasm and wonder and imagination I didn’t hear in many composers working at that time. He was the perfect pulp film composer, his music was always bombastic and full of wonder, even goofy at times, but never condescending, and never anything but intentional.

Goldsmith’s stuff was always solid and great, but you could tell it just came so easy to him. He didn’t phone it in by any stretch, but he was very much a craftsman, it felt like just a job. Williams’ work, while also great, always had an inherent sophistication/high-brow feel, which, while certainly not a bad thing, prevented it from crossing over into the “wow, gee whiz” territory in the same way Horner’s did. Only Elfman and Silvestri, I guess, came closest to capturing what Horner did back then, but at that time their work was all too one noted to really compare. Only Horner’s music seemed to elicit a genuine love and fascination and understanding with what makes genre movies great, and did it in a dynamic way. Everything he wrote felt so alive and in love with the story, whether it was science fiction, or fantasy, or action, or horror, or adventure, whether it was dark or light hearted, he always got it, and his scores contained all that enthusiasm, you could genuinely feel it and it was affecting. 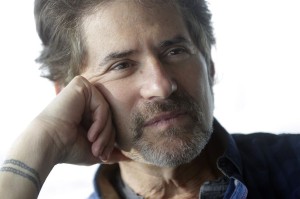 You have to be a story teller to write great film music, because you have to understand story telling in order to not just reflect the emotion of the scene, but how to reflect it in the right degrees, to pace it, to know when to build and when to explode and when to slow down. It’s not intuitive, it only seems that way when you watch because it’s done correctly. James Horner was a story teller, and he wrote everything with exuberance, and there’s no question he felt the stories he scored, and listening to that, as a kid trying to learn to write, it was like someone guiding me through story crafting. If I mirrored beats in a scene to the beats in the music, the scene generally worked in a dynamic way — though, certainly, that didn’t mean it was ever well written (generally, it was a long ways off). More than that, his music to me as a kid was just a conduit into imagination, letting the sounds take me to other worlds with other characters, in brief spurts. To this day, I still create everything to music, and much of it still comes from his soundtracks. I wrote one of my favorite scenes in VALLEY OF FIRES to a track from STAR TREK 2. In my new book, ALIENS is playing a very large role in some of the exploration scenes, of a similar tone to when the marines explore the Alien infested world under the colony.

Like a lot of artists, I guess, his later work wasn’t of the same caliber. Other composers came and took over innovating, like Zimmer and Mansell, but every time I hear one of his early soundtracks, I’m still sucked in in the same way. Horner had several devices he used all the time back then: echoing trumpets, a triplet pattern ascending bass line…and something that sounded like a giant spring being hit with a hammer, and they all mark it as entirely distinctive. It was the spring sound that was my favorite. For all I know, that actually was a giant spring being hit by a hammer, which, honestly, would make it even cooler. That sound came, for me, to represent 80’s scifi, and it holds a cherished position in my youth. If you were a kid in that time, you’d know that sound.

Thanks for the spring sound James, and all the inspiration. You’re still my favorite film composer, and you’ll be missed…

(You can hear the infamous giant spring at the very beginning of the above track, and throughout)